Dancing out in the West Somerset area 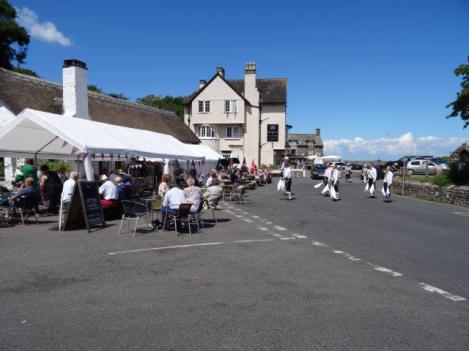 West Somerset is beautiful area and has some stunning villages and panoramas. On a good day, which is most days, you can see all the way to Wales.

We are also very lucky to have many picturesque places to dance at such as Porlock Wier (insert) and Dunster as well as some fine hostelries selling traditional local ales and ciders.

In order to get back back into shape after such a long break, within the Covid-19 rules, the West Somerset Morris commenced outside practice sessions from May through to July. Although rather stiff and rusty, the dancers soon got into their stride with leaps and bounds.

The Morris  dancers took a brave step and began dancing out at two venues in July: Washford Inn and Bicknoller Inn.

This was followed by dancing out at the Bird in Hand at Bishops Lydeard, the Carew Arms at Crowcombe, the Rest and be Thankful at Wheddon Cross and then at Burrowhayes, Luccombe.

Photos for 2022 are on the Gallery page.

* Details to be added

Practices will start again in the Autumn of 2022

Start time to be announced nearer the time.